One of the main attractions for visitors to Weymouth is the famous soft sandy beach. Stretching along the coast and the Esplanade and beyond, this stunning beach is filled with relaxing holidaymakers during the summer months, and is a picture of fun and relaxation. 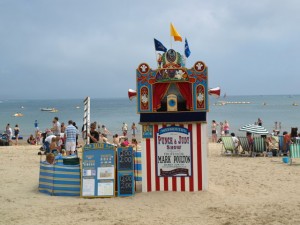 Punch and Judy are there to entertain the children and there are also donkey rides, a sand modeller, trampolines and pedalos for hire for those wanting to get out on the water.

The sands stretch from the Jubilee Clock, a landmark on the Esplanade, right up to the Pavilion Theatre, in a sheltered bay that slopes very gently. To the east the beach is pebbled and stretches some 3 miles to Bowleaze Cove, which can be reached by walking the wide promenade that backs the beach as far as Overcombe Corner.

Weymouth has King George III to thank for its popularity as a seaside resort. He visited the town to bathe in the sea from 1789 until 1805, and since then many have followed in his royal footsteps to sample the delights of the golden sands.

Weymouth beach is also popular out of season when a stroll along the promenade or water’s edge is the ideal way to walk off a Sunday lunch. And when the wind blows and whips up the tops of the waves the views literally take your breath away!