The railway came to Weymouth in 1857 and the original station was larger than the one we see today, which was built in 1986. 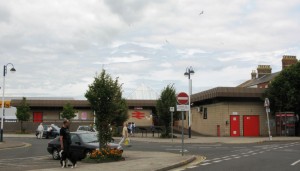 In 1889 the line was extended along Commercial Road to carry goods and passengers direct to the boats at the harbour.

Right up until the 1980s traffic would come to a standstill as the train made its way along the road, led by a man waving a red flag. Parked cars often had to be removed to allow the train to pass through the streets.

These days, the tracks are only used occasionally when ‘special’ trains make the journey to the harbour.

Managed by South West Trains Weymouth has a regular service to London Waterloo and Bristol, for National Rail Enquiries call 08457 48 49 50.

By Geof Sheppard (Own work) [CC BY-SA 3.0 or GFDL], via Wikimedia Commons