A short stroll along the Esplanade brings you to Weymouth’s pretty 17th century harbour, a small port with a long maritime history. 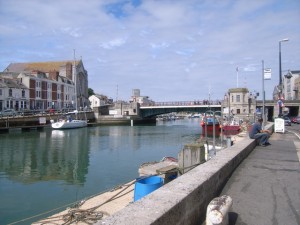 The two sides of the harbour were once separate communities, Weymouth on the south side and Melcombe Regis on the north. In 1571 Queen Elizabeth I proclaimed that the two unite, becoming the borough of Weymouth and Melcombe Regis.

The port prospered and handled much of the produce that was exported into England from the Channel Islands. Flowers, tomatoes and vegetables would arrive by cargo ships to be distributed throughout the south of the country. After being unloaded the cargoes would be carried by train on the railway tracks that still run along the road. These remained in use until the 1980s, when they carried passengers to and from the Channel Island ferries.

Today, there is a thriving fishing fleet that mixes happily with the visiting yachts and the pleasure boats that offer trips around the coastline. Many of the fine old buildings remain and now house quality restaurants and family attractions. On the far side of the harbour a disused brewery building now houses specialist shops, a café and the Timewalk family attraction, which tells an animated tale of Weymouth’s long history.

With its lifting road bridge, character pubs and ever-changing scene, the harbour has become one of Weymouth’s most popular destinations, a place to sit and watch the world go by.